BigPicture lets you create basic tasks as an alternative to Jira issues. With basic tasks there is no need to fill a dozen of Jira fields, just enter a name for your basic task. A basic task can aggregate its child issues (Sum time, Count status, etc.), or it can be a milestone, or phase, or whatever issue type your Jira doesn’t have. Basic tasks do not litter your Jira’s backlog, they stay within the BigPicture context. Here is a guide on when and how to use basic tasks (formerly artificial tasks). 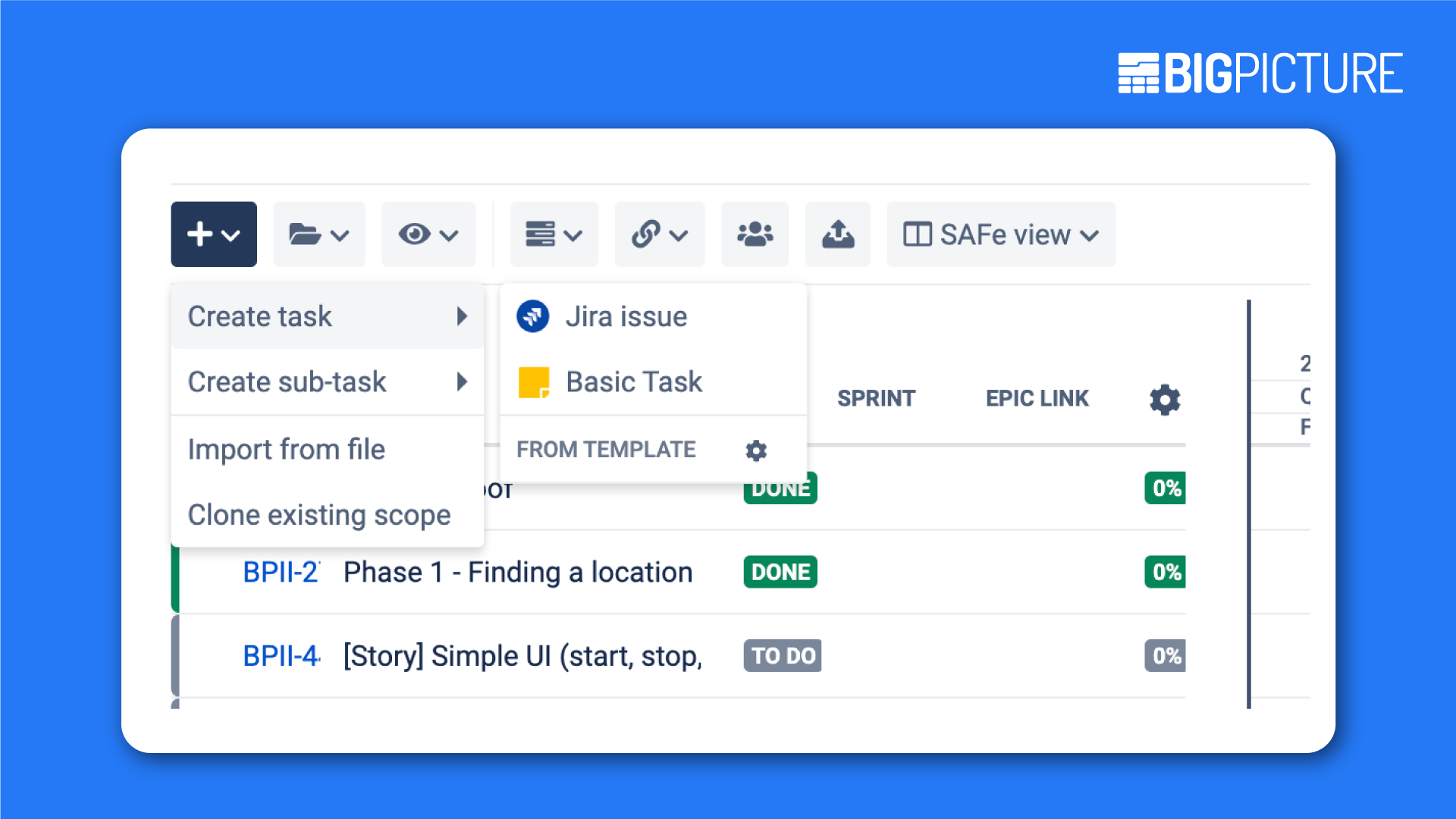 You invoke basic tasks with the “+” button in the top-left corner of the Gantt module. The ‘Basic’ designation debuted in BigPicture 8. Until BigPicture 7 they were known as artificial tasks, but the ‘Basic’ label seems more intelligible to business users. The label is there to distinguish BigPicture native tasks from Jira tasks.

When do basic tasks work well?

Within the BigPicture and BigGantt contexts, basic tasks coexist with Jira issues and are subject to the same set of rules. For instance, you can establish a dependency in BigPicture between a basic task and a Jira issue, as seen in figure 3. 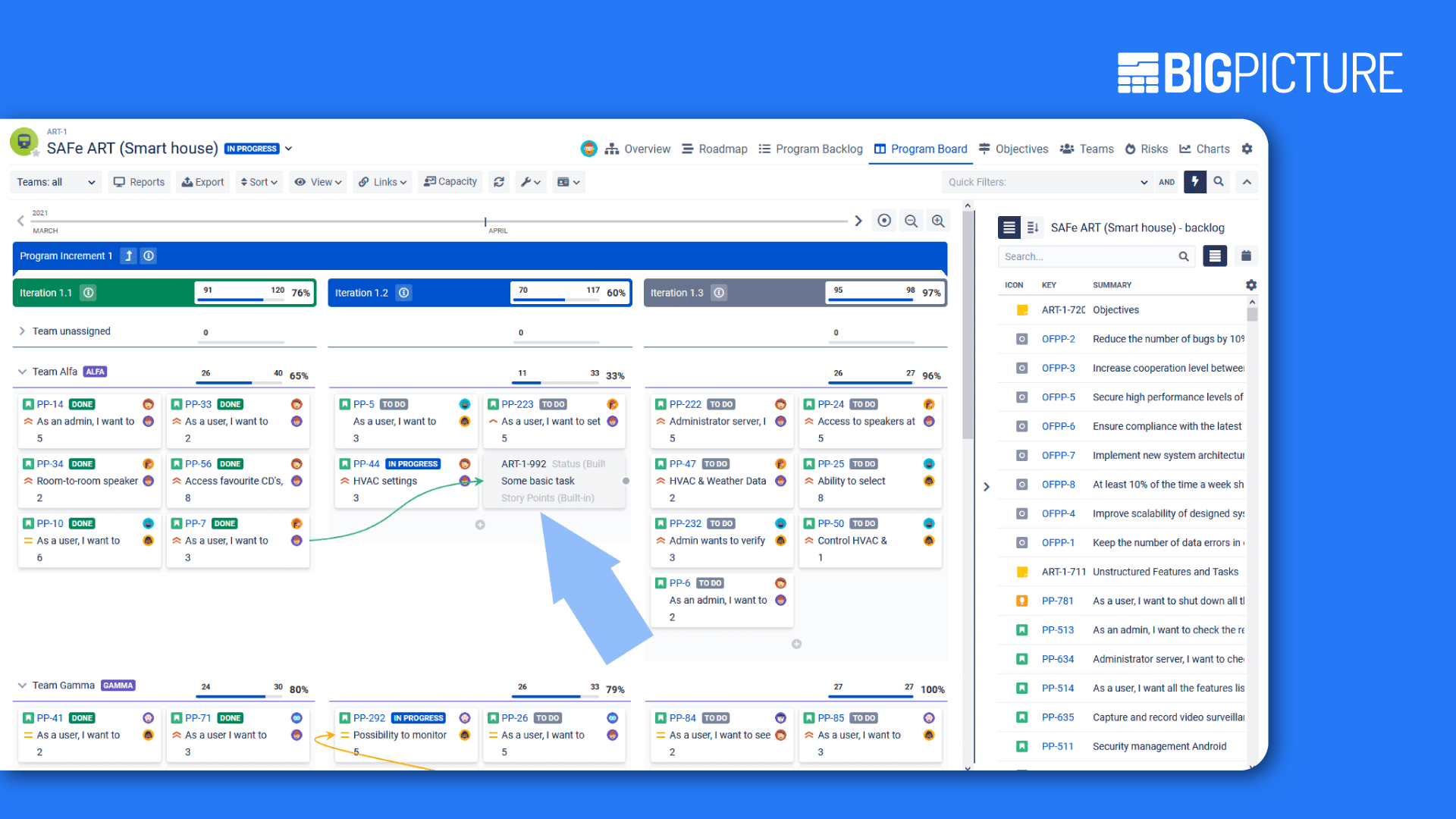 Figure 3. Basic tasks and Jira issues behave almost identically within BigPicture context, for instance, they can be interconnected with dependencies in Program Board module. Note the ‘Some basic task’ card interconnected with the PP-7 Jira user story.

Users wonder, when does it pay to fill dozens of fields to set up a Jira issue, and when a basic task is more effective. After all, a name and start/end dates are all you need to enter to create a basic task.
This is how users leverage basic tasks in BigPicture and BigGantt:

Project templates made of Basic tasks

Other than simplicity, there is one more advantage that BigPicture basic tasks have over Jira issues. You can group basic tasks into templates/project drafts. We see that many Product/Project Managers preset the ‘Analysis – Development – Testing’ sequence, as seen in figure 4. They can quickly add this set to the Gantt chart/Roadmap timeline and then gradually hook up Jira tasks to the three parent tasks as the project takes shape.

—We’ve created a project plan with basic tasks. It was a presale stage and the goal was to show the project vision but not to “spam” Jira with irrelevant tasks. Now, as we are on the project, we might decide to transform the basic tasks to real Jira tasks – a BigPicture user told SoftwarePlant helpdesk.
—A word of warning, though. Some PMOs use basic tasks as “portfolios”. They maintain one, two, or more such basic tasks-portfolios in the timeline of the Gantt module, a kind of command center for the whole organization. This made sense until BigPicture 7, but starting BigPicture 8 we recommend retiring basic tasks acting as portfolios. BigPicture 8 added a mature Overview module with versatile Boxes. Boxes prove more effective as portfolios, aggregators, project templates, and containers – says Jerzy Sekula, Product Owner at SoftwarePlant.

Given the choice of basic tasks and Jira issues, what to use when? Whenever:

the basic task is probably more effective than a Jira issue.

Basic tasks are faster to set up, easier to manipulate in BigPicture, capable of being parents “parents” to other tasks. Basic tasks do not inflate Jira backlog. They are real project management tasks meant for planning and scheduling of work. Basic tasks have the added benefit of zero redundant fields to be filled.
What is the difference between Create task > Basic task and Create sub-task > Basic task? Both scenarios give birth to a new basic task. In the former scenario, however, the newly created basic task will be a brother of the currently highlighted task; while in the latter case, the newly created basic task will be a child of the currently highlighted task.

How to delete an artificial/basic task?

To delete a basic task (formerly artificial task) go to the Gantt module, highlight the task to be deleted and press the trash button as shown in figure 5. 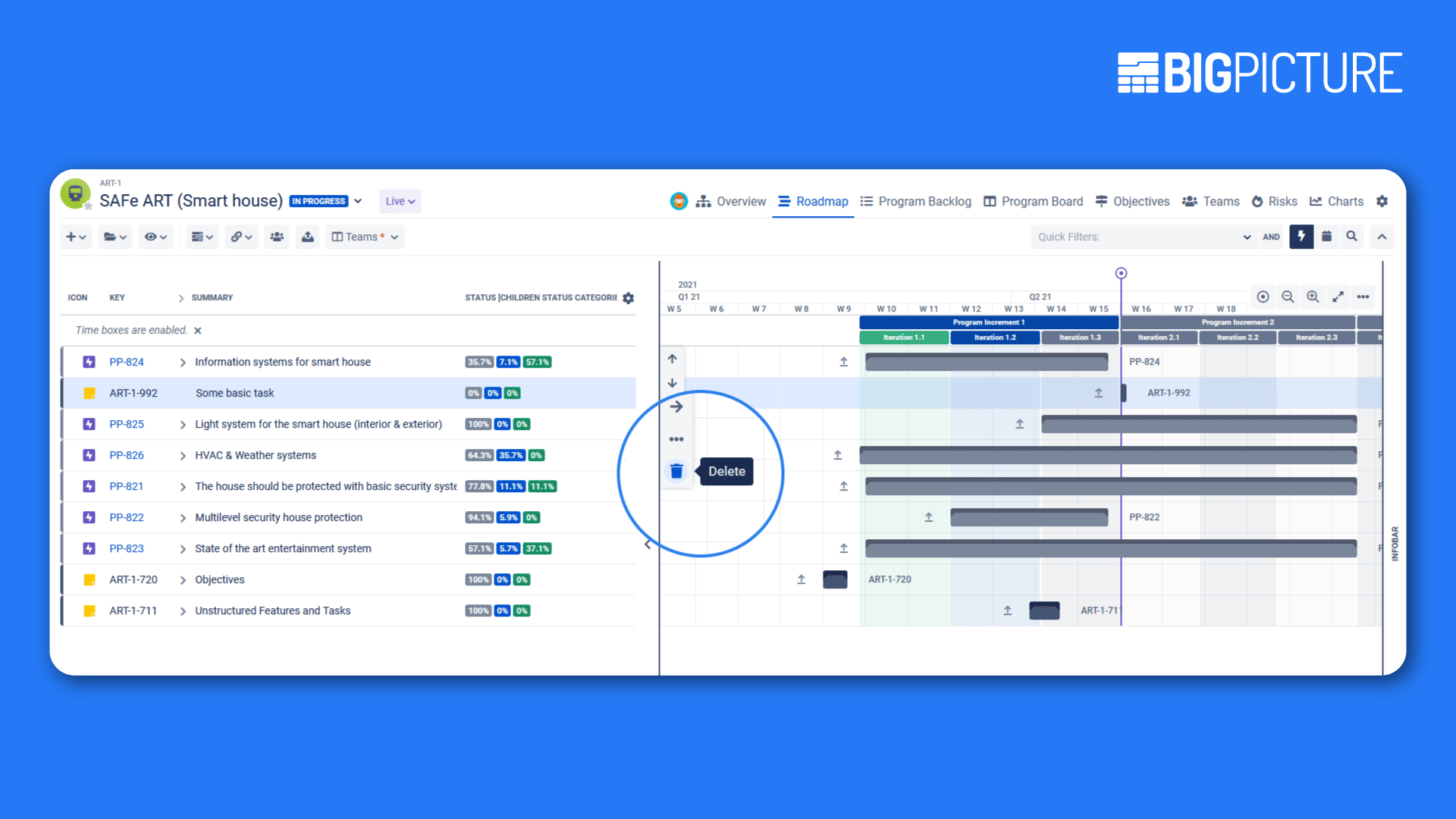 Figure 5. Deleting a basic/artificial task from BigPicture. Note that the Gantt module was renamed to ‘Roadmap’ for the purpose of this Smart house SAFe ART Box.

Why do people keep asking how to delete BigPicture native, artificial tasks? As of BigPicture version 8, only Gantt module let you create and delete basic tasks, while all other modules can only use basic tasks. SoftwarePlant is working on unifying the add/delete mechanism across all modules.

How will basic tasks evolve?

Basic tasks are a BigPicture and BigGantt phenomenon, and so we feel entitled to present this quick profile and roadmap of how basic tasks will evolve; see table 1.
Basic tasks, once supplementary to Jira issues, are now becoming full-time project and product management tasks. This has a lot to do with BigPicture solidifying as a major Jira PPM player, but also as a standalone BigPicture.one platform.

If you like the simplicity of basic tasks, give a try to objectives available in Roadmap module. Similarly to a basic task, all you need to do to set an objective is to press ‘+’ and enter a name for the objective. No need to fill a dozen Jira fields. The objective is another BigPicture native, business-oriented item – an alternative to engineerish, development-biased Jira issues. 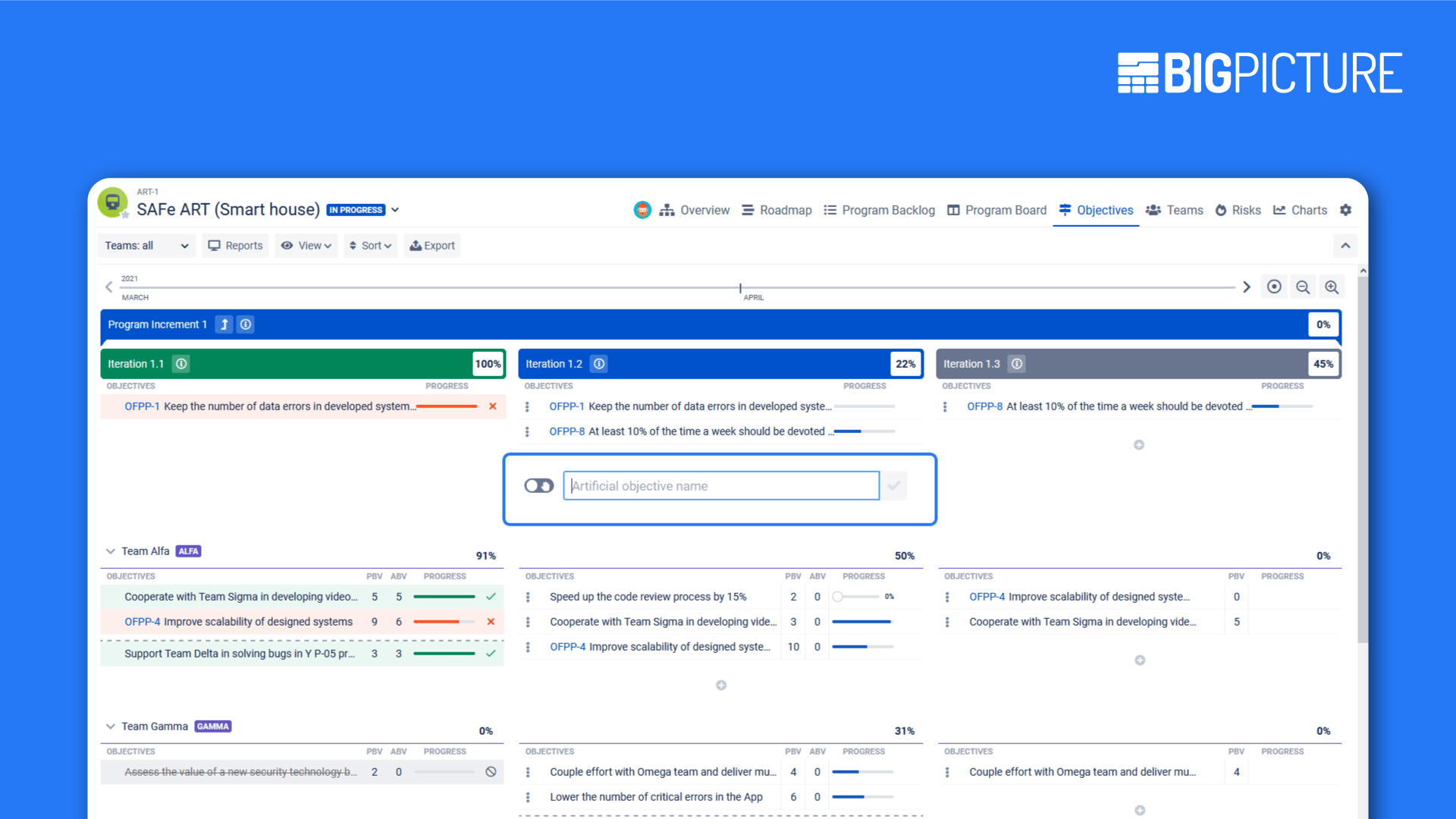 Figure 6. Creating an objective in Roadmap module of BigPicture. The ‘Artificial…’ placeholder stands for what artificial tasks once were. Note that the Roadmap module was relabeled to ‘Objectives’ for the purpose of this Smart house SAFe ART Box.