How Story points and Velocity help plan iterations in Agile 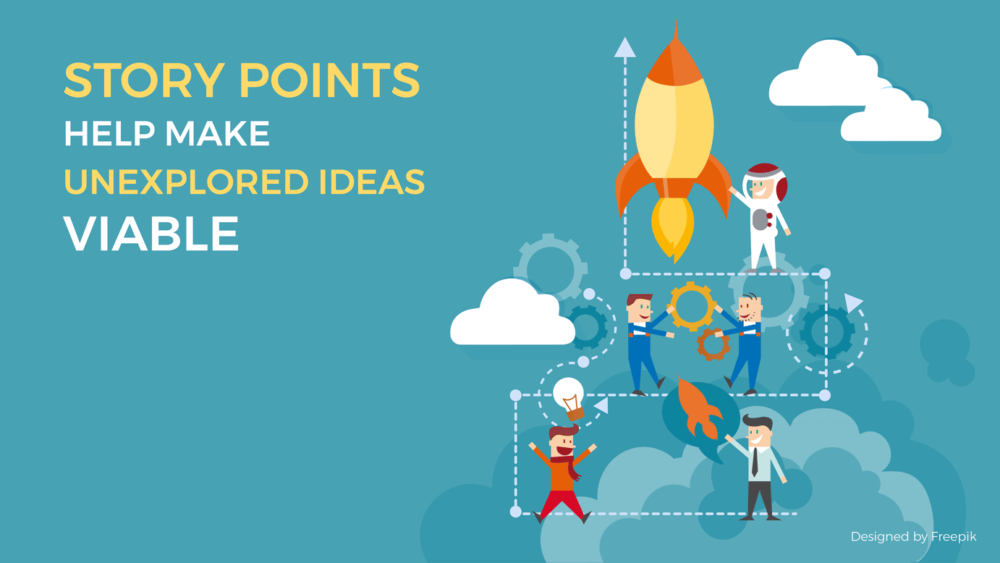 It is widely known that in Agile your team gathers every two weeks (typically) to set goals for the next iteration. It is less known, however, how to estimate tasks from the backlog in story points and how to use velocity to plan the appropriate amount of work for following iterations. Here is a step-by-step guide.

Why bother with story points?

Wouldn’t it be easier to estimate tasks in hours? Story points let you overcome the ever true problem of underestimation. It’s easier to say that “Fixing a coffee machine will take me 1 story point”, than to confess that “fixing the exact same machine would take me 16 hours”. Let’s face it: people are reluctant to openly admit, how impotent they are.

But there is another major benefit of using story points instead of hours: you can deliver potentially most profitable things first. This is called WSJF (Weighted Shortest Job First).

So how to plan iterations using story points and velocity? Let’s go into more detail.

Example: Say, you are a coffee machine serviceman and we all know that sooner or later every coffee machine will stop dispense coffee for some reason. The more you master your job the more you believe that there are only a couple of typical reasons why coffee stops flowing. But having arrived at a client’s office to fix their machine you don’t know yet – possibly calc have accumulated in coffee block or maybe you would be replacing the water pump, and finally there is a marginal risk of non-standard failure.

And we didn’t mention that, but washing machines and refrigerators are in your portfolio too, so you are not that much of an expert. Instead, you can roughly say, that an average coffee machine breakdown equals to 1 story point.

And so work story points in any business. Sure, you are an expert in your field compared to an average Joe Doe, but you are not an infallible expert.

(2) Estimate tasks in your backlog

We use Jira + BigPicture Story Points field to estimate tasks.

Say, the cadence of your iteration is 2 weeks and your business is open 5 days a week. The capacity of a team member would be 10 days, but since one of your party of four took a one-day leave, that individual’s capacity would be 9 days. Now add capacities of the four team members: 10 + 10 + 10 + 9 = 39.

Two weeks (a single iteration) have passed, so you can calculate velocity. The circumstances were not the best, so even though your team had planned tasks with a total complexity of 20 story points for the past iteration, they have only managed to “burn” 10.

Say, the capacity of your team in the upcoming iteration equals to (10 business days – one-day national holiday) * 4 team members = 36.

Given the previously calculated velocity of 0.2564 and those three business days that you’ve allocated to 0 sp tasks, plan tasks worth a maximum of 36 x 0.2564 = 9.23 story points for this next iteration. High-priority tasks go first.

What if there are no serious bugs on the backlog? Should your team still spend 3 days fixing bugs? Yes – says Pawel Guz, responsible for driving operational excellence in SoftwarePlant – if no high-priority bugs are found on the backlog then the team should spend the three days fixing lower-priority bugs. What’s more, the team could plan, say, further 20% of its capacity for meetings and other zero-story-point issues. Contrary to the aforementioned bug fixing 3-day cushion, the “meetings and others” buffer doesn’t have to be used up but it must not be exceeded. If the team saves time on meetings, it can allocate it for regular story point tasks or bug fixing.

Even with that precise planning more often than not it will turn out the team cannot deliver even those 9.23 story points. What now? Have you set “Goals for the iteration” or “Goals for Program Increment”. They will help you decide which tasks can be postponed until the next iteration and which cannot. Two tools in BigPicture let you set goals for iterations and Program Increments Board and Roadmap.

BigPicture’s agile board. Evident are tasks planned for the Iteration 1 and Iteration 2 and these tasks have priority over those sitting in the Backlog. You can edit story points inline.

The priority of tasks can also be set in Roadmap module of BigPicture. Drag high-priority objectives to the top of each Team’s to-do list. Drill up to the Program Increment level to set long-term goals, those for whole PIs.

Instead of ‘regular’ capacity and velocity, you could use these:

Example: Capacity for Growth of your team in the upcoming iteration equals to

Pretty obviously, if you stick to the “for growth” variants, planning of the subsequent iterations would look as follows:

After a few weeks or months using story points and velocity for iteration planning gets simple and intuitive. You certainly need some project management software – look around for the ‘Story Points’ field in your ‘edit task’ view. The whole thing boils down to deceiving the enemy, who are in fact your own team members, that try to prove to the management that problems can be solved painlessly in the more and more complex world.