Distributed and dispersed teams. How to plan them in Jira?

International teams often work different days and hours. Israel makes an obvious example with the Sunday through Thursday working week. Norwegian employees work 7.5 hours per day, while there is the 9-hour working day in Singapore. How to plan dispersed or distributed teams in Jira? 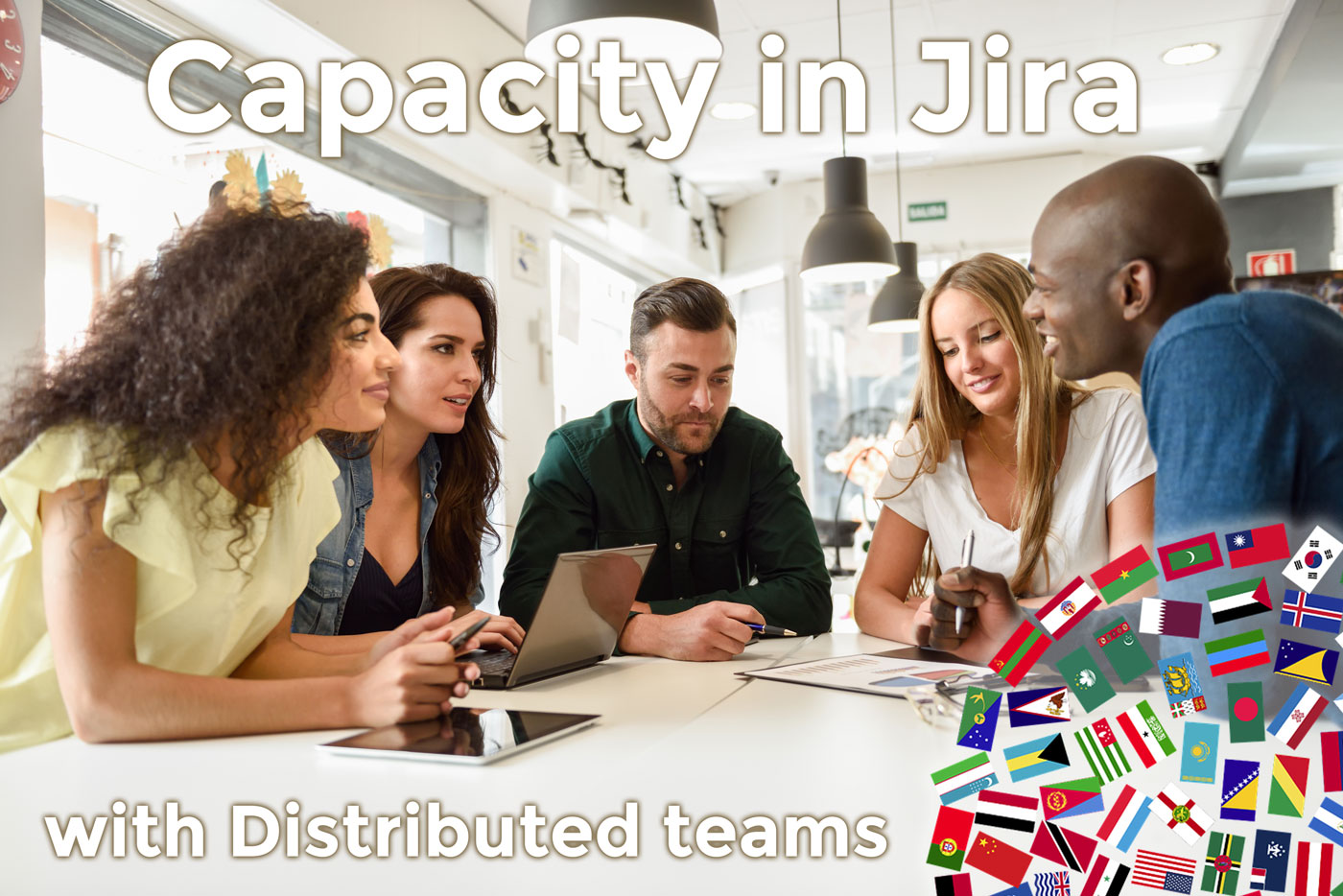 Annual meeting of a dispersed team. With dispersed and distributed teams you deal with distinct time zones, different business days and unique national holidays. How to plan their capacity in Jira? Designed by javi_indy / Freepik

The terms are sometimes confused. Historically, and in real life, we more often deal with distributed teams: one team in San Francisco, another team in New York, yet another one in Paris. All people in a single team work in the same geographical location.

Example: A global advertising agency with distributed teams catering to their local country markets. Each team consists of a brand strategist, a copywriter, a key account and a social-media marketing specialist.

With a dispersed team, on the other hand, you manage professionals dispersed throughout a country or the world, but grouped into one team.

Example: an Android/iOS apps software house, that has a programmer in Poland, two programmers in UK, testing staff in Mexico, and a salesperson in Seattle, U.S.A.

How to plan capacity of a distributed or dispersed team in Jira?

A workload plan for Israel. BigPicture resource and project management app for Jira. With distributed and dispersed teams it’s crucial to have several workload and holiday plans set.

As Jira doesn’t recognize the concept of “team”, most project managers use some plugin, or app for resource management. Regardless of which plugin you choose, there seems to be consent on how to plan a distributed/dispersed team’s capacity:

Example: Josh uses the “general” workload plan,  Mon-Fri, 9 to 5. Ann uses the “Young mum” workload plan – Fri-Sat 10 am to 2 pm. The team of Josh and Ann (both members with 100% availability) will have the following capacity:

Some teams use “fixed” weekly capacity, regardless of how much they actually work – more on that here.

Distributed teams on the resource board in BigPicture. Note, how the daily capacities of Israel, Norway and Singapore teams are different – 16, 15, and 17 hours respectively. Note the zero capacity for Israel Team on Friday. The grid is in “Team” mode, as opposed to the “Individuals” mode.

Have you noticed the “both members with 100% availability” statement above?

Typically a team member devotes 100 percent of his efforts to a single team. But consider this example: Jacob is a programmer and an avid tester. He shares his duties between two teams. Therefore his availability could be as follows:

Although Jacob’s daily capacity is 8 hours, because of his 50 percent availability in the programming team, he brings only 4-hour capacity to that team.

How to deal with time zones?

Most Jira resource/PPM apps have no “timezone” field, but is this an issue? Some project managers tell us that they plan capacities of their international teams in the project managers’ time zones, no matter in what country their staff members actually work.

How to choose a plugin for resource planning in Jira?

If you’re not sure, just pick a well-balanced complete PPM plugin with a resource module. Such an app would consist of several modules, e.g. resources, as well as risks, Gantt chart, and roadmaps. Most mature resource-related apps for Jira show some bias, in other words, they focus on (an) aspect(s) of resource management. There is an article discussing the differences between major resource management apps for Jira.

We recommend our native BigPicture. The video shows how to plan capacity for an international team in BigPicture/Jira.

How to deal with daylight saving time?

Since some countries observe daylight saving time, is it advisable to have two separate workload plans: for winter and for summertime? In most cases the answer is “No”, as long as project managers are capable of doing their own computing. 8 hours per day, or 7.5 hours per day, or whatever the number of hours, is what really matters with resource planning.

While the majority of the Western world works Monday through Friday, 9 am to 5 pm, or 40 hours per week, there are notable exceptions. Find some of them in the table:

Dispersed and distributed teams’ capacity planning boils down to setting up the separate workload and holiday plans for each country in your Jira resource app.

Although not about capacity planning per se, consider these two things: